Winning in the new world of production

Struggling to gain oversight to sufficiently manage risk with their manual processes, Sid Gentle Films partnered with We Got POP on season 2 and 3 of Killing Eve. With POP’s Production Portal in use on Killing Eve, Sid Gentle streamlined their process, improving teams’ efficiency and gained confidence in their compliance with complete oversight of their IP and data risks. 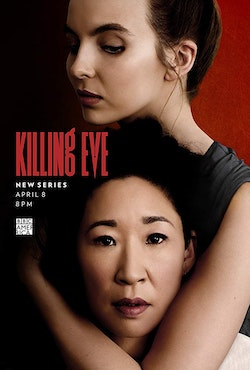 Here Production Executive Chrissie Broadway shares her experiences of being powered by POP on season 2 and 3 of Killing Eve.

The nature of the current inflationary market means crew are progressing much faster than they would have 10 years ago. As a result, human error was exposing us to too much risk, and we had no oversight of that risk and the situation on our sets.

GDPR was also coming in and made me relook at our processes and reassess my confidence in our compliance. I wasn’t certain that when I promised we were compliant that we were.

Prior to POP on season 1 we used a system for watermarking, but with this we still needed one person managing every single contract by hand, it was a full time job with so much room for human error and data breaches.

Adrian Kelly, a Line Producer on season 1 of Killing Eve had trialled other software solutions but felt that he needed a system to handle all of his production processes, from digital cast and crew contracting to mass watermarking to secure distribution. In Adrian’s search he found POP’s Production Portal and made the request to Sid Gentle Films to use POP on Killing Eve season 2.

Following Adrian’s request, I did my due dilligence and sought out my network of Heads of Production and Production Executives opinions of POP and found some of your other clients who spoke highly of POP.

With other software I’ve tried the back end was always a mystery, it seemed a bit scary and I didn’t know how to use it. POP demystified the entire process. If I say something doesn’t work: POP fix it. If something doesn’t make sense to me I can speak with the designer directly to understand. So many other businesses say “this is our product: use it like this”. POP has said “every production is different: how can we fit it so it works for you?”

POP has been revelatory, we know and can prove that our policies are being followed and that all crew have signed contracts before getting on set.

Our deals and contracts are so much quicker and easier so the whole process if more efficient. Now I know the deals are done properly I don’t have to spot check formatting because the contracts are standardised.

“What used to work doesn’t now that we’re in a GDPR world. POP has been revelatory, we know and can prove that our policies are being followed and that all crew have signed contracts before getting on set,” explains Chrissie.

I’m confident that when I say to broadcasters that we’re compliant, that we are because I don’t have to rely on anyone’s word - I have complete oversight of who is under contract and who is not. Having that self reliance has made closing financing much quicker and easier. If we were ever to experience an accident POP would really come into its own. We’d have indisputable proof that call sheets and risk assessments had been sent and seen to provide to insurers.

Before POP I was spending a lot of time trying to fill gaps and plug holes. Now, I spend a lot less time doing that because we have a safety net with POP.

The experience of partnering with POP

We want to run secure and legal productions to continue growing our international presence and make the best high end drama. POP has freed up our time so we can focus on these bigger picture goals while ensuring our productions are compliant. Now that I’ve experienced our process with POP, and the security it offers, I don’t want to run shows without POP.

I’ve used POP on season 2 and 3 of Killing Eve and the system has only gotten better and more intuitive. The team are so forward-thinking “POP are thinking ‘what’s the problem’ and asking ‘how can we solve it?” so I’m excited to see what the future holds for Sid Gentle and POP. I cant believe how quickly POP have responded to our feedback and continually make the product better. It’s really impressive.

Before POP I was spending a lot of time trying to fill gaps and plug holes. Now, I spend a lot less time doing that because we have a safety net with POP. Because the production is more efficient, I’m able to focus on the bigger picture aspects of my job like script meetings which previously I had skip to sign contracts. Until people have used POP, they don’t know how much it’s worth. Once you start using it you will never want to stop.

Gain oversight, protect your business and invest time where it counts